Where Is My Primary Replica Again?

To perform management you almost always need to connect to the primary replica, but how can I figure out which one is primary without just connecting to the instances one by one until I get lucky?

This query can be run on any of the replicas, and it will return information about the Availability Groups and their member databases, *including* the name of the primary replica instance!

How Long Did That Job Run?

When you use the msdb tables to try to gather information on your SQL Server Agent jobs, inevitably you will end up in a situation like this:

So....when did "DatabaseIntegrityCheck - SYSTEM_DATABASES" start? At 1500 - is that 3pm?  You may be able hash out that this translates to 12:15am local time...but what if you want to perform datetime-style math on the RunDate/RunTime?  Sure you can do multiple leaps to say (RunDate>X and RunDate<=Y) AND (RunTime>A and RunTime<=B), but you then need to explicitly format your X, Y, A, and B in the appropriate integer-style format.  Wouldn't it be easier to just be able to datetime math?

The next part is even worse - quick - how long did the first instance of "ServerA_RESTORE_FROM_PROD_V2" run?

In truth, the job ran forty-one minutes and thirty-one seconds.

Yes, yes I am.  No precision beyond seconds, and no quick way to do math.  if you want to figure out how much longer instance 1 of the job ran than instance 2, you have to do some serious goofiness to figure it out.

Here is the fix for both of these problems!

The first item is easy although not directly obvious without a little help from that old standby:

Microsoft included a system scalar function msdb.dbo.agent_datetime(run_date, run_time) that turns the combination  on run_date and run_time into a datetime:

I agree with the author of this post who calls the agent_datetime() function "undocumented" since there wasn't a record of it in Books Online - I checked around and couldn't find any standard documentation of it on MSDN or TechNet.

Now that we have a datetime, we can perform all of the regular datetime manipulation functions such as DATEDIFF() on the values.

The second part is a little more obnoxious - there isn't a quick Microsoft function (documented or otherwise) to make the run_duration into a process-ready value.

To hash the run_duration into a useful value I wrote a CASE statement some time ago:


Interestingly I recently discovered a more elegant solution (while looking for a answer to a different problem) that utilizes the STUFF() function.  Look at this forum post on SQLServerCentral.  The fourth item down from "Mudluck" is almost exactly the same as my CASE statement above, but look at the reply below it from "JG-324908":

Sure enough, running this STUFF() code results in the same output as the much more complicated CASE statement above.  JG notes that he/she found it in a forum post somewhere and I dug around a little to see if I could find the original author without any luck :(

As with many other bits of code, I keep these things in a big NotePad file of useful code snippets (some people like OneNote instead, and there are dozens of choices - use the one you normally prefer) so that I can quickly reference them when needed.  I always note the website or forum post where I found the code if I didnt create it myself as well as the original author.  This lets me give credit where credit is due when showing the code to others, but it also gives me an idea of someone to approach in the future if I have a question about a similar topic.

It was especially interesting to find the STUFF() code because STUFF() isn't a function I often use, and in this case it was perfect.

Don't Use Delimiters In Your Object Names!

It started with a failed backup status check:

Check out the database name - [FinanceDB],  At first my response was something like:

This was on a SQL 2008R2 instance, but as a test I created a database named [test] on my local SQL 2014 instance and sure enough it worked!

The source of the problem at the client was the LiteSpeed maintenance plan.  Even though the backup task was set to backup all user databases, it wasn't picking up the square-bracketed database.

On my test system I set up a "regular" SQL Server maintenance plan, and it had did not have the same problem - the backup job did pick up the square-bracketed [test] database.

I next ran the Ola Hallengren DatabaseBackup that I already had installed, and it also picked up the rogue database, creating a backup named TestServer_[test]_FULL_20160404_143721.bak.

That was strange - remember the original backup job succeeded (although not backing up the square-bracketed database).  I considered and realized in the original situation there were two databases - one with brackets and one without.  Sure enough when I created a database just named "test" and included it in my new maintenance plan, the job succeeded.

How did it succeed?  It backed up "test" TWICE:

The LiteSpeed Fast Compression backup backed up the "test" database twice (Fast Compression runs a FULL every so often and DIFF's in-between - this is why two backups in a row results in a FULL and a DIFF).  I ran the job again and saw the same thing:

I verified by creating an object in [test] and running the backups again and running a restore - what I was backing up was truly "test" over and over.

This is not about bashing Dell/Quest LiteSpeed - it is about pointing out a shortcoming in how SQL Server allows us to name objects and a cautionary tale on that naming.

Although it worked in most of the test scenarios above, you can see how the square-bracketed database name failed under one maintenance scenario - and not only did it fail, it failed in a particularly nefarious way because the backup job *didn't* fail - it just didn't pick up the database.

I re-created my [test] database on my local instance and wanted to see what the syntax would look like for a DROP - I went through the SCRIPT action in Management Studio and ended up with this:

Note the *three* square brackets at the end of the DROP statement – two open brackets but three close brackets.

A syntax checker parse showed statement OK – when I removed one of the closing brackets, so that I had two open and two close, the parse showed me this:

…and an execution resulted in the same errors.  When I re-added the third close square bracket, my DROP statement succceeded.

A script of a simple BACKUP statement resulted in the same thing:

This third bracket may be the source of the issue in LiteSpeed and it may not - but it shows the importance of handling object names properly and how touchy the parser can be when you don't make it happy.

At the end of the day - just don't do it.  There is always going to be some other name that is just as useful as any name that includes a delimiter, and you don't need to handle the bizarre and inconsistent scenarios that will arise. 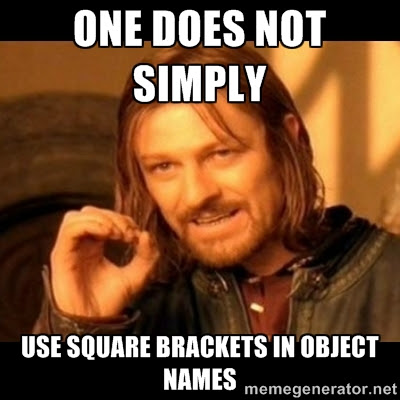