As so many stories do, this story starts with a failover - in this case an Availability Group (AG) failover.

There were several different backup and status check jobs failing on NODE01 and NODE02 because the AG01 availability group was now primary on NODE02 instead of NODE01 after a failover.

The failover occurred the previous Saturday morning at 8:30am local server time because of an application-initiated server reboot of the 01 node:

Always fun when an application “unexpectedly” restarts a server without advance warning.

Even though the Quest/Dell LiteSpeed Fast Compression maintenance plans are configured to pick up “all user databases” the availability group databases were not being backed up currently and hadn’t been since the failover:

The error messages on the SQL Error Log on the 01 node are telling:

Date       7/24/2017 1:09:23 AM
Log        SQL Server (Current - 7/24/2017 12:59:00 PM)
Source     spid269
Message    FastCompression Alert: 62301 : SQL Server has returned a failure message to LiteSpeed™ for SQL Server® which has prevented the operation from succeeding.
The following message is not a LiteSpeed™ for SQL Server® message. Please refer to SQL Server books online or Microsoft technical support for a solution:
BACKUP DATABASE is terminating abnormally. This BACKUP or RESTORE command is not supported on a database mirror or secondary replica.

** IMPORTANT **  - while this specific scenario is on a cluster running Dell/Quest LiteSpeed Fast Compression backups (a process that uses an algorithm to determine whether a differential is sufficient or a full backup is required each day), the problem does *not* directly relate to LiteSpeed - the problem is with running differential backups on availability group secondaries or database mirror partners in general.

The situation around running differentials on secondaries is described in this post from Anup Warrier (blog/@AnupWarrier):

The particular issue here is the fact that the AG’s aren’t weighted evenly, so even though it is “invalid” for the differentials, the AG still prefers NODE01 because it is more heavily weighted: 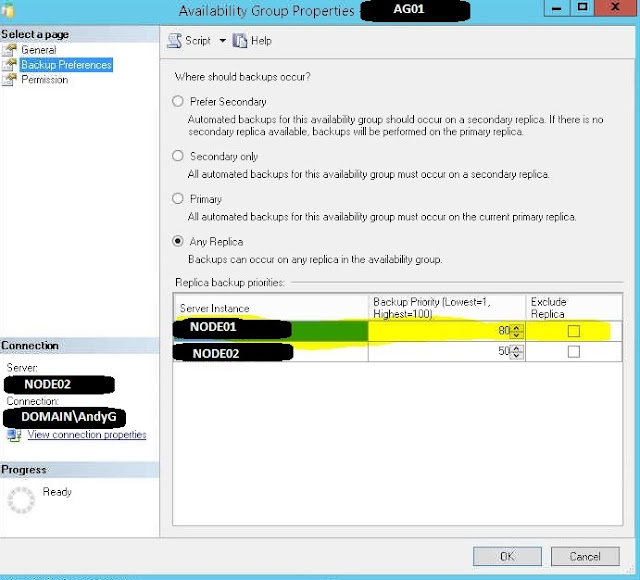 My recommendation to the client to fix this on LiteSpeed Fast Compression was to change the backup option on the AG from “Any Replica” to “Primary” – this would keep the backup load on the primary, which means the differential backups would work.

The cost to this is that the backup I/O load would always be on the primary, but since the “normal” state for AG01 is to live on NODE01 with backups on NODE01 then requiring the backups to run on the primary node would not be different in most situations.

Note this is the state for this particular AG - in many cases part of the use of AG's is being able to offload backups to the secondary, so in many cases this is a cost to be weighed before making this change.

If you want to run backups on the secondary node then my personal best suggestion for fixing this would be outside of LiteSpeed/Fast Compression – if you want/need to stay with differentials, we could use a scripted backup solution (like Ola Hallengren's Maintenance Solution) to enable/disable the full/differential backups on the secondary node, probably by adding a check in the backup commands to ignore databases that aren’t the AG primary.

Another option would be to go away from differentials completely and just run FULL’s and LOG’s which would allow for the current 80/50 weight model to continue.

Toolbox - Which Tables are Using All of My Space?

This is the next in a new series of blogs I am going to create talking about useful tools (mostly scripts) that I use frequently in my day-to-day life as a production DBA.  I work as a Work-From-Home DBA for a Remote DBA company, but 90+% of my job functions are the same as any other company DBA.

Many of these scripts come directly from blogs and articles created and shared by other members of the SQL Server community; some of them I have slightly modified and some I have lifted directly from those articles.  I will always give attribution back to the original source and note when I have made modifications.

In the previous post in this series "Toolbox - Where Did All My Space Go?" I shared a script for finding which database files consumed the most space and which of those files had free space in them.  The next step after finding out which databases are using the space is determining which tables in those databases are occupying that space to consider purge/archive opportunities.  In many cases you will find a single large table (often called a "mother table") taking up most of the space in your database.

I found a script created by a developer from Switzerland in a question/answer on StackOverflow.com and modified it slightly to return the specifics I wanted.  Among other things I added the InstanceName and DatabaseName because in my job I frequently create documentation or reports for external clients who don't necessarily know the result set came from a particular instance and a particular database:

This allows you to easily find the largest tables (you can modify the ORDER BY to find the tables with the most free space as well to look for inefficient indexing or design).

Once you have the largest tables in hand you have the starting point for a discussion on potential purges or archives. 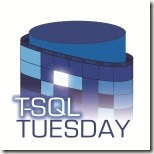 It's T-SQL Tuesday time again, and this month the host is Raul Gonzalez (blog/@SQLDoubleG).  His chosen topic is Lessons Learned the Hard Way. (Everybody should have a story on this one, right?)

When considering this topic the thing that spoke most to me was a broad generalization (and no, it isn't #ItDepends)


Yes I am old enough (Full Disclosure) to know many people associate the phrase "Trust But Verify" with a certain Republican President of the United States, but it really is an important part of what we do as DBA's.

When a peer sends you code to review, do you just trust it's OK?


When a client says they're backing up their databases, do you trust them?


When *SQL SERVER ITSELF* says it's backing up your databases, do you trust it?


(Catching a theme yet?)

At the end of the day, as the DBA we are the Default Blame Acceptors, which means whatever happens, we are Guilty Until Proven Innocent - and even then we're guilty half the time.

This isn't about paranoia, it's about being thorough and doing your job - making sure the systems stay up and the customers stay happy.

My belief has always been that people are generally good - contrary to popular belief among some of my peers, developers/managers/QA staff/etc. are not inherently bad people - but they are people.  Sometimes they make mistakes (we all do).  Sometimes, they don't have a full grasp of our DBA-speak (just like I don't understand a lot of Developer-Speak - I definitely don't speak C#) - and that makes it our responsibility to make sure things are covered as a DBA - we are the subject matter expert in this area, so we need to make sure it's covered.

As I said above, this isn't about paranoia - you do need to entrust other team members with shared responsibilities and division of labor, because as Yoda says:

...but when the buck stops with you (as it so often does) and it is within your power to check something - do it!

Toolbox - Where Did All My Space Go?

This is the first in a new series of blogs I am going to create talking about useful tools (mostly scripts) that I use frequently in my day-to-day life as a production DBA.  I work as a Work-From-Home DBA for a Remote DBA company, but 90+% of my job functions are the same as any other company DBA.

Many of these scripts come directly from blogs and articles created and shared by other members of the SQL Server community; some of them I have slightly modified and some I have lifted directly from those articles.  I will always give attribution back to the original source and note when I have made modifications.

How do I find these scripts, you may ask?

Google is still the top tool in my toolbox - it never ceases to amaze me what you can find by Googling an error number, or the snippet of a message, or simply an object name.

(Disclaimer - I use Google from familiarity but the occasions I have used Bing haven't shown much different results.)

The first script I want to share comes from MSSQLTips.com and was created by frequent MSSQLTip author Ken Simmons (Blog/@KenSimmons) - it shows the free space in each of the database files on the instance and default comes back sorted by free space descending:

I use this all of the time to troubleshoot space issues - not only to find out what is taking up space but also to see if there are files with excessive empty space that can be examined for cleanup.


Do not willy-nilly shrink files - it causes all kinds of problems with file fragmentation and potentially with performance - but there are times where you just don't have any choice, and this is an easy way to find candidates.