It's that time of year when SQLSaturdays start to slow down (in the U.S. anyway) as we march towards Summit and the holiday season.

Having said that, I have three speaking engagements in the near future - two SQLSaturdays and...SUMMIT!!!


I will be giving slight variations on the same talk at all three events as I tweak possible changes for my Summit talk.

Minnesota and Lincoln are always amazing events, and this is only my second time speaking at Summit.  I have spoken at more than a dozen SQLSaturdays and yet I get edgy thinking about being on stage at Summit (it's just a really big SQLSaturday, right?  ...right?)

The talk I am giving is my Extended Events talk:


Getting Started with Extended Events

Few subjects in Microsoft SQL Server inspire the same amount of Fear, Uncertainty, and Doubt (FUD) as Extended Events. Many DBAs continue to use Profiler and SQL Trace even though they have been deprecated for years. Why is this?

Extended Events started out in SQL Server 2008 with no user interface and only a few voices in the community documenting the features as they found them. Since then, it has blossomed into a full feature of SQL Server and an amazingly low-impact replacement for Profiler and Trace.

Come learn how to get started - the basics of sessions, events, actions, targets, packages, and more. We will look at some base scenarios where Extended Events can be very useful as well as considering a few gotchas along the way. You may never go back to Profiler again!

I have been tweaking it to add more demos and extend the length (Summit sessions are 75 minutes and most SQLSaturday sessions are 60-70 minutes.)  Even if you have seen me present this session before I hope you will get something out of it.

Another important part of SQLSaturdays and Summit to me are the pre-conference sessions/workshops.  They do cost an extra fee but it is worth it for a full day of in-depth training on a topic by a dedicated speaker (events like this don't give preconference slots to just anybody).

All three of these events have preconference sessions, and to me as primarily a systems DBA I recommend the following:

Data Security for the Cloud by Ed Leighton-Dick from Kingfisher Technologies - I have known Ed for some time and he has put a lot of time into becoming a rising star in the security area.

Level UP! Your Cloud Infrastructure Skills by David Klee of Heraflux - David is one of the top (if not the top) speaker on SQL Server on VMs and the cloud.

Data Security for the Cloud by Ed (see above) - if you don't see Ed in Minnesota you have another chance in Lincoln!

Modernize your SQL Server with Bob Ward, the Tiger Team, and CSS Escalation Engineers by Bob Ward and the SQL Tiger Team from Microsoft - nobody can melt your brain like Bob Ward.  Any time you can see Bob speak, you should...period.

Fixing Query Performance Problems from Estimates, Statistics, Heuristics, and Cardinality by Kimberly L. Tripp of SQLskills.com - Kimberly knows more about statistics and the related topics than anyone I know, and she shares it so well.

Kimberly and Bob are in the same time slot (all-day Tuesday) and in this case I am going to see Bob but I have already had weeks of training from Kimberly and if her topic sounds more interesting to you it will be worth it!

Hope to see you at these events and in the preconference sessions!

Did Not Know That - Redirecting CMD to the Clipboard

One of the items I frequently deal with as a Production DBA is drive alarms.  I have written previously about looking for space inside database files, but what if your problem is non-database files?

The goto tool in Windows for me has always been du (Disk Usage) created by Mark Russinovich (blog/@markrussinovich) as part of his Sysinternals project.

du is a very straightforward command tool the traverses the directory structure below the current path and returns the folder sizes of the given folders.  For example, the output for C:\Windows on a given server looks like this:

Fine to look at, but a bit onerous to manipulate - after all this is just a screenshot.

The first way I knew to deal with this was via the >> redirect:

This would create a text file at the path being searched containing the output from the command, which can then be copy-pasted out to another site: 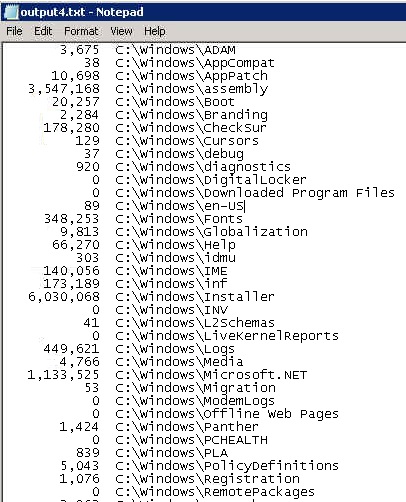 To clean it up for manipulation (in Excel for example), you can add a parameter to du to turn the output to comma- or tab-delimited format (either -c or -ct): 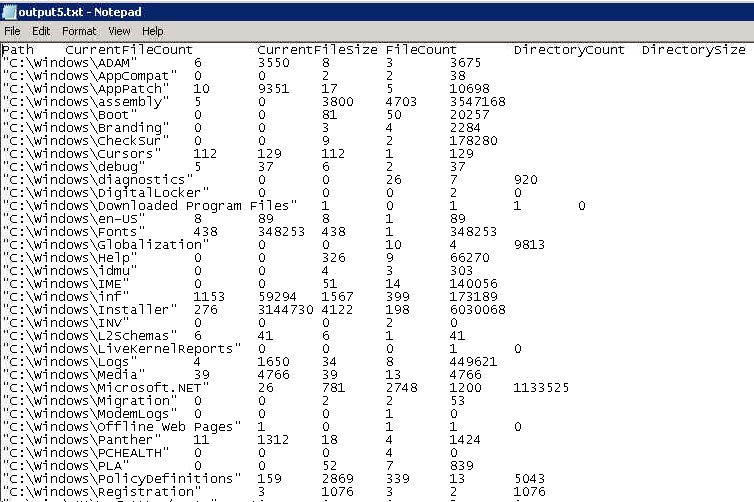 The new trick I learned is that you can use a pipe - similar to Powershell - to redirect the output of the du command to another command, and that there is a command to send the output of a command directly to the clipboard (unbelievably enough, called "clip"):

I found this trick in a helpful blog post here.

Once it's in the clipboard, it can be pasted straight into Excel where it can be easily sorted, for example to find the largest directories: 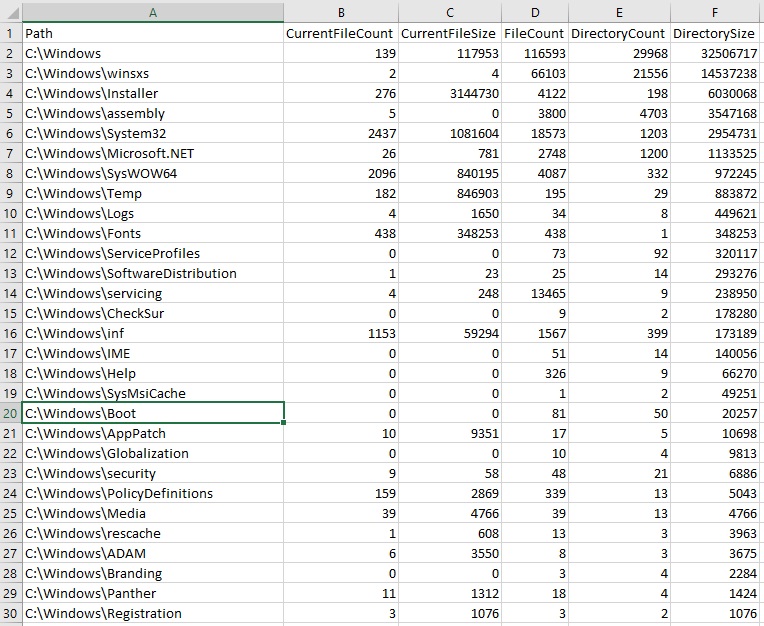 This same process of piping into clip works with a wide variety of command line commands, but this is the one for which I see the most immediate value.