Part of a series of posts on cool stuff I learned at PASS Summit v20 (2018) - in this post we'll look at a code editing tool that I hadn't seen before - Visual Studio Code.

When I attend a session at a technical event - Summit/SQL Saturday/etc. - the question inevitably comes:

I always answer that I'm a DBA, but really we're all Developers as well - it's just what language we use.

I have been developing in T-SQL for almost 20 years, and for much of that I have been using the ultimate editing tool...Microsoft Notepad.

In the early days I developed in Query Analyzer (Yes, I'm old) and then Management Studio, but over time most of the work I have done is now at client sites on client servers, so I don't run Management Studio on my laptop very often (pretty much just when I write blogs and work on presentations actually).

I write my code in Notepad and then copy-paste into the client window and execute...and it has worked for me for some time.

Sure there's no Intellisense, but I lived with it.  I have had times in the past (although I haven't re-tested in some time) where Management Studio became a resource hog - especially with multiple sessions open - and made my laptop unhappy, so running little tiny Notepad was the trade-off and it worked for me.

As a "TSQL Developer" I never had the need for full-on MS Visual Studio to justify the cost to myself or my employers.

In several sessions at Summit v20 I saw the presenters open a different tool; you could tell from the appearance that it wasn't commercial MS Visual Studio, but it wasn't Management Studio either. 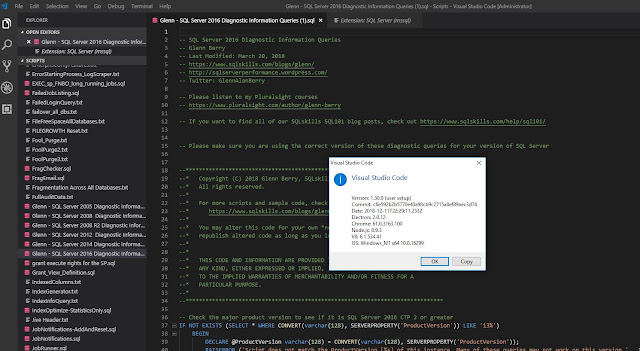 The second time I saw it, I asked the speaker what they were running, and they gave a three minute demo of an open source tool called Visual Studio Code.

It is an open-source tool...

As I was saying, it is an open-source tool, and because of that it can run on multiple operating systems, including Windows, MacOS, and Linux.

It turned out that was why the speakers I saw were running it - it was a tool they could run on the MacBooks they use to present.

(Not going to get into a philosophical MS vs Mac argument here, but the next time you are at a SQL Server event, watch how many high-end presenters are using Macs - it may surprise you!)

I have played with it some since I returned from Summit and it is growing on me - the first time I opened a TSQL file it prompted me to install a SQL extension, which wasn't an issue.

I can see how this tool will be useful to all DBA's, but especially those that also developer in some other language - Visual/Python/etc. - as well as those that like Mac or Linux.