Why Can't I Reinitialize My Subscriber?


I recently had a colleague request help with a replication problem he was having with a client.  The client was running transactional replication from a SQL Server 2005 Publisher to multiple SQL Server 2005 Subscribers and was having issues after attempting to add several articles (tables) to an existing publication.

The initial error reported on multiple subscribers looked like this in Replication Monitor: 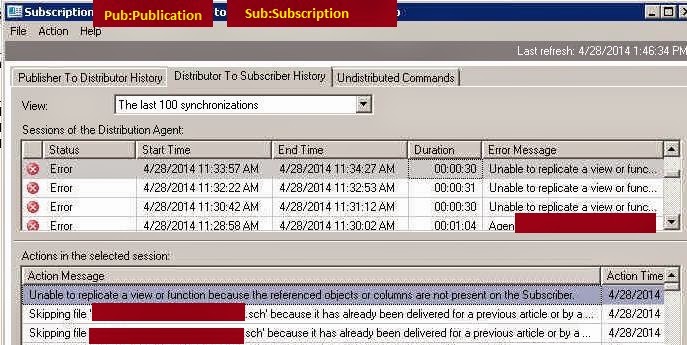 “Unable to replicate a view or function because the referenced objects or columns are not present on the Subscriber.”

To me this said that some of the article changes that had been made during the publication change hadn’t been properly sent to the subscribers, so I decided to reinitialize all subscriptions: 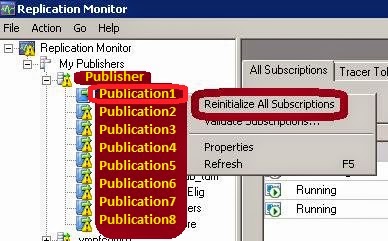 (Another colleague pointed out that I could have reinitialized only the broken subscriptions one-by-one, but in this case a majority of the subscriptions were broken and the publication was relatively small.)

--
Three of the four subscriptions failed re-initialization with two different errors, one with a object reference error and the other two with a replication error.

The first subscription, on SubServer1, failed re-initialization with the following error:

Cannot DROP TABLE 'dbo.Table99' because it is being referenced by object 'View1'.

I found that the referenced view was created with SCHEMABINDING, which was preventing the related table from being dropped and recreated.  The view didn’t have any explicit permissions on it, so I scripted the view, dropped it, re-ran initialization for that subscription, which succeeded, and then recreated the view (again with SCHEMABINDING as it was originally).

SubServer2 and SubServer3 had a different but actually related issue: 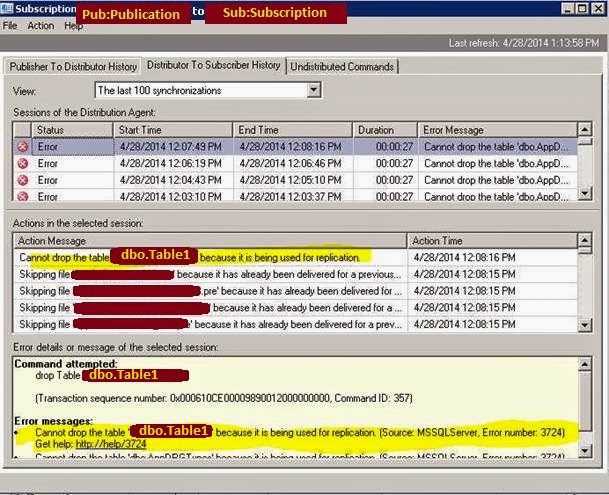 In both of these cases, the re-initialization was failing because a table on the subscriber couldn’t drop a table being used in replication.  What this essentially means is:

For information on re-publishing and the order of steps required to use it, see the TechNet article here and the blog post here.  There are many limitations on both the publications and the subscriptions involved in such an arrangement.

The fix to this is alter the properties of the offending articles, or all articles, in the publication (in this case the change was made to all articles, but it could have been made one-by-one as well: 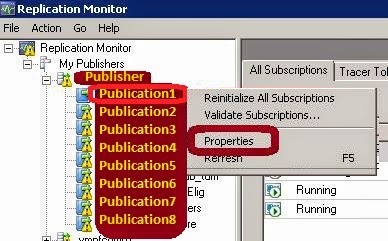 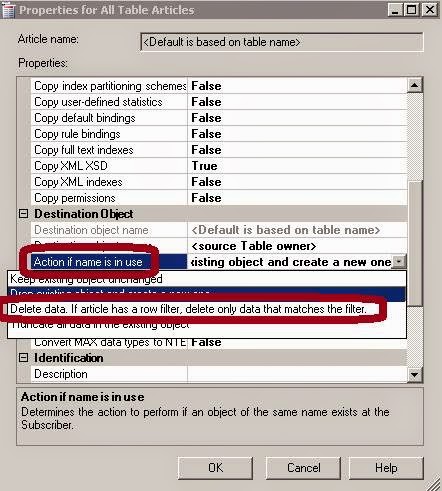 The decision on what to do here should be based on how critical the replication is to your infrastructure (if you need it fixed *now* you may have no alternative but to generate it right away) and how large the publication itself is (a large publication can be time- and resource-intensive to generate and transfer a snapshot during business hours).

In this case based on the tables included in the publication it was possible to “Generate the new snapshot now” because of its relatively small size.  This re-initialization completed successfully on all subscribers with the “Delete Data” option configured.